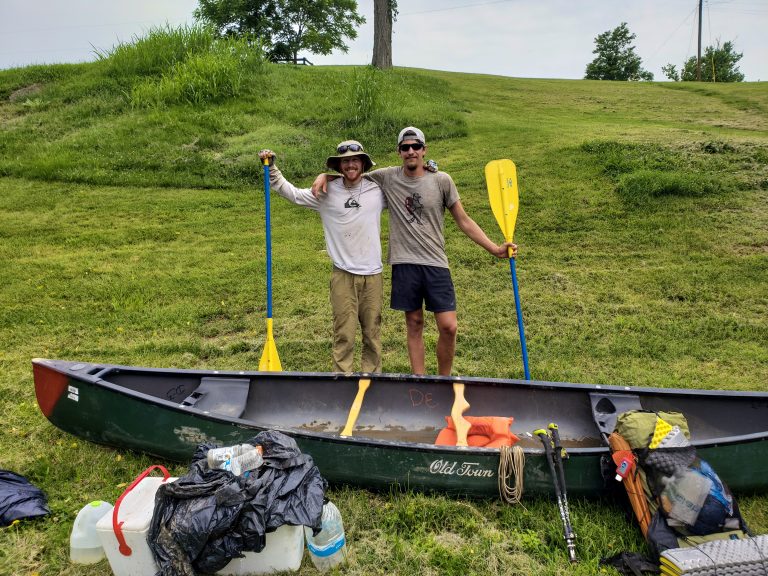 Canoeing On The Shenandoah River

As we planned our canoeing trip while staying in Waynesboro, we called several outfitters for canoe renting options. Most of them told us that the water level on the river is way to high because of all the rain. We only found one who told us we should call him the next day. It could be possible that we can start our trip on Sunday morning.

We called him the next day and he said we are good to go. I was so happy that the canoeing trip got reality. So we went to Walmart and did our resupply for the canoeing trip on the Shenandoah River. As we didn’t need to consider the weight because we didn’t need to carry it, we were able to buy a lot of cool stuff. Be bought a cooler, beer, ice, can food, bread, meat, etc.

At the next morning we got a shuttle with four other guys to the starting point of our trip. As we arrived there were already a lot of other hikers waiting. In total we were 15 people in 7 canoes and 1 kayak. We started about 11am and had to do 25 miles to the first campground. It was the campground of the outfitter we rented the canoes from. The gave us a real short introduction into paddling and told us about the worst rapids on the river.

Rhyme Time and myself took one canoe together. We packed all our stuff in the canoe and started the trip. As the current was very fast we mustn’t paddle hard to gain some speed. The sun was out and we all had a lot of fun on the first stretch. Some of us definitely had way to some beer ? But after about two hours the river got way harsher. The rapids got bigger and the current sometimes hit our canoe sideways. Once at a river crossing the current drifted our canoe to the left side right into a tree. We were really lucky to be able to steer through a little free spot and we immediately reached some big class two rapids. The canoe just after us also got drifted away. They didn’t reach the free spot and flipped. Pretty all of their stuff was flowing down the river. As we were just in the rapids concentrating not to get sideways we weren’t able to get their stuff. After the rapids we almost got all of it. All in all we had three boats which flipped on that day. I think the only things missing were two mobile phones. And we all reached the campground before 6 pm. That basically means we did 25 miles in about 6-7 hours including breaks. That’s pretty amazing!! The outfitter was just besides the river. They had a huge open grass field where we could set up all our tents. I slept pretty good that night.

The next morning we were told that there were two missing guys on the river. There was a really big search and rescue action ongoing. The water level was really high and the rapids for the next stretch were supposed to be way too dangerous. The river was closed for the day. We went into town and had some great food there. Because we had a whole day of free time we played some games and had a great party that day.

On the third day the news in the morning weren’t too good. Same as the day before. The police found one of the two missing kayaks but no bodies so far. So we were stuck on the campground for another day. That day was pretty boring. We were used to walk far distances every day. We were basically walking every minute during the day. I knew the day after I would canoe the river or go back to hike the trail.

In the morning of the fourth day we all got green lights. The outfitter just had to shuttle us down the river for two miles because of the ongoing search and rescue action. So we went back to canoe the Shenandoah River. All of us did way better on the second day on the river. I think we all needed a bit of training. Sadly six people left that morning. The weather was great again. Sunshine all the day. There is definitely no shade at all on the river. I already got a great taint. In the evening we found a huge open field besides the river. An ideal camping spot for such a big amount of people. Actually, it isn’t easy at all to find a camp spot while canoeing on a river. About half of the land is private property. It’s definitely a lot easier while hiking on the trail.

Every single morning I get up about 5:30. It’s incredible. Almost like an inner alarm. The next morning I had breakfast, watched the sunrise and just enjoyed the moment. As no one else got up I went for my tent again and immediately felt asleep again. As I woke up again at about 9 am all the other guys already had breakfast and packed all of their gear. I was in a hurry to also pack all of my gear. Besides that Rhyme Time and myself were the first ones on the river. Once more we enjoyed the ride on the river and the surrounding landscape. In the evening we found an awesome spot. It just looked like an official campground. There were numbered spots and also some very clean porter potties. But no indication how to pay for the spot or any sign of people there. We decided just to stay. The worst think what could happen is that we all had to pay for our stay. But luckily nobody came.

On the next day we should reach the city Front Royal. Some of the people wanted to get off the river at that city. Rhyme Time and myself once more we’re the first ones on the river. This day we decided not to wait for the other people. As the current got way slower this day we had to paddle a lot. Definitely a good upper body workout. The outfitter told us about some upcoming class 3 rapids on a stretch about 3 miles long. We paddled through that stretch. There were definitely some rapids there. But nothing too bad. As we already did over 5 miles we thought that we reached the end of the rapid stretch. But we weren’t right this time. We got to a little stretch with some heavy rapids. At first, we steered our canoe into the rapids. The waves were really big and we got a lot of water in our canoe. We tried to keep out canoe straight. Sadly, the last wave hit our canoe sideways and we flipped immediately! I tried to hold myself on the canoe. Rhyme Time was already far away. Luckily we secured our backpacks with our food hanging rope. It took us about 20 minutes to reach the beach. It was nearly impossible to swim to the beach because the current was way too fast. As we made our way to the beach there was already a man helping us to get out of the water. We immediately checked all our stuff. We only missed a gallon of water and some beers. Our mobile phones were working. The only broken stuff was my iPhone headset. Brian, the guy who helped us, invited us for some coffee and hot breakfast. Awesome! Trail magic on the river! We reached the Shenandoah River National Park and looked for a nice spot to set up our tents. There was mostly private property. We almost reached the end of the park as we saw a nice looking picnic area. I spread out all of my wet stuff and we set up our tents. Just as we were ready for dinner, the police was showing up. They told us we are not allowed to camp at the picnic area. Bummer! So, we packed our stuff again and luckily found a little spot just on the other side of the river.

We only had about 18 miles left for the next day. Our final destination is called Watermelon Park. It’s an official campground besides the river. The outfitter told us that this is the last spot to get out off the river. After Watermelon Park the river is supposed to be way to dangerous for normal people in a canoe. We arrived there at about 11am. A bit earlier than we thought. Our canoe was in a good shape after 5 days on the water. We got an Uber for getting into Harpers Ferry. In total we did 148 miles on the river within just 5 days.

Harpers Ferry is a cute little town with a lot of civil war history. There are a lot of old building. We will definitely do a zero day there. We also heard of a challenge. It’s possible to hike through four states within just one day. The stretch is about 43 miles long and starts just right after Harpers Ferry. Maybe we’ll try and do that! By the way, Harpers Ferry is the unofficial half way point on the Appalachian Trail!