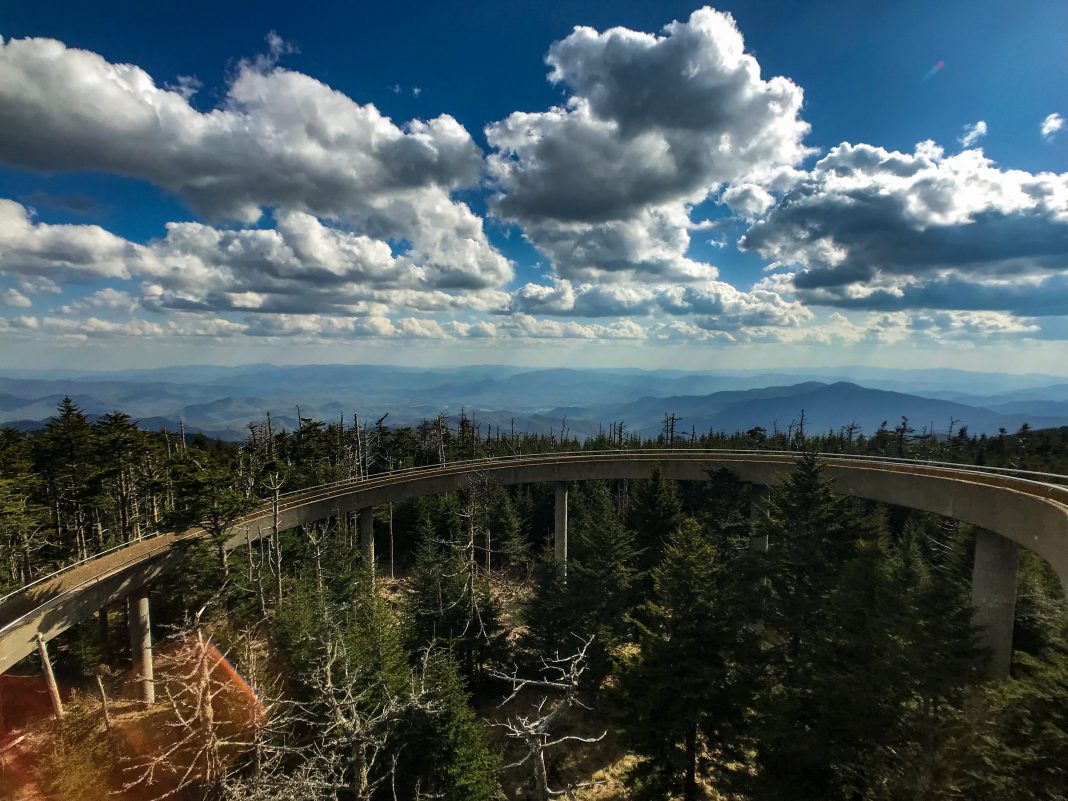 After a long week with very bad weather, rain and thunderstorms, things should get better for the Great Smoky Mountains National Park.

We took one more day of before the Smokies. After hiking the whole day in the rain we didn’t want to setup our tents. Poncho and I took a room in Fontana Village. Fontana Dam is the official start of the Smokies. Fontana Village has some awesome lodges for just 50 bucks each person. It’s very nice out there. I think the hikers are a bit of season. There’re not that many tourists around now.

After the last day of rain we pushed into the Smokies. At first you have to climb a big mountain, which was very tough. We did about 17 miles that day. The day after we already did 16 miles and we were at a shelter at about 4 pm. A bit too early. So we decided to push on to Clingmans Dome which is the highest point on the entire Appalachian Trail. On that day we did 23 miles/37 km. An absolute crazy distance for one day in this rocky and steep landscape. But every footstep was worth that views. You realize how big this country and the Appalachians are. Awesome!!

Right at the Clingmans Dome there’s the 200 mile mark. So yeah, already 200 miles done in less than three weeks.

On the third day we wanted to push on. So we did 21 miles. On that day we did the second state, North Carolina. We’re in Tennessee now. Hello Tennessee!!

Your feet feel absolutely horrible after an average of 20 miles a day in that elevation with a heavy backpack.

On the fourth and last day in the Smokies we only had 15 miles left to get out of the Smokies. So we did the entire National Park in only 4 days. Most hikers need around 6 to 7 days. We passed a lot of thru-hikers and section-hikers in these days. I am doing pretty good so far.

Btw, in the National Parks you’re only allowed to stay in shelters. If the shelters are full you’re allowed to setup your tent nearby to the shelter. So no stealth camp spot in the Smokies. There’s a lot less privacy there, because you meet a bunch of people there.

Next stop will be Hot Springs. One of the most popular cities on the Appalachian Trail because the trail just goes through the city. I’ll keep you updated!

I Was On The Radio

Matthias
My name is Matthias, also known as "Bernie". I'm a sofware engineer. But I'm also addicted to hiking and beeing outdoors.

ABOUT ME
My goal is to show all the people what i am doing out there on the trail. So the people at home can follow my life on the trail.
Contact me: bernloehrm@gmail.com
FOLLOW ME
© 2017 | Matthias Bernlöhr | All Rights Reserved | Impressum
We use cookies on our website to give you the most relevant experience by remembering your preferences and repeat visits. By clicking “Accept”, you consent to the use of ALL the cookies.
Cookie settingsACCEPT
Manage consent

This website uses cookies to improve your experience while you navigate through the website. Out of these, the cookies that are categorized as necessary are stored on your browser as they are essential for the working of basic functionalities of the website. We also use third-party cookies that help us analyze and understand how you use this website. These cookies will be stored in your browser only with your consent. You also have the option to opt-out of these cookies. But opting out of some of these cookies may affect your browsing experience.
Necessary Always Enabled

Any cookies that may not be particularly necessary for the website to function and is used specifically to collect user personal data via analytics, ads, other embedded contents are termed as non-necessary cookies. It is mandatory to procure user consent prior to running these cookies on your website.

The Way To Damascus