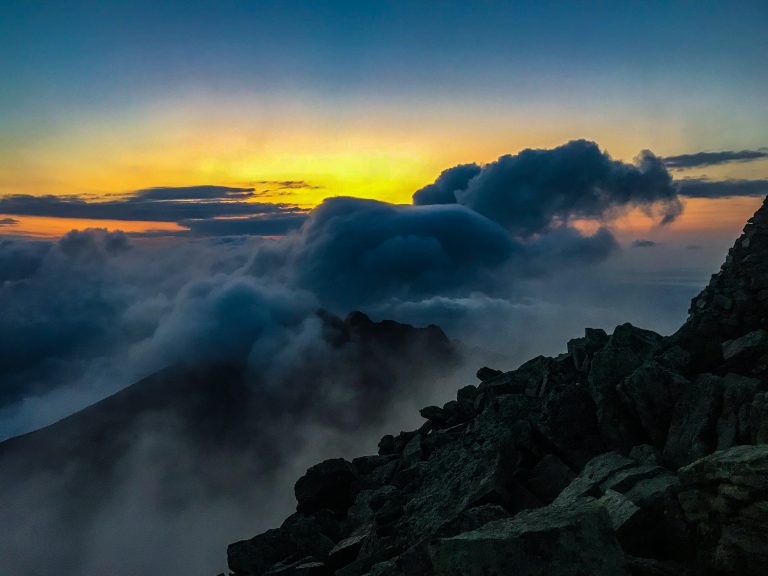 Having the opportunity to stay at the lovely cabin, which Sherpa‘s parents rented, was amazing. Little did we know that we should stay another night at the cabin pretty soon.

We only had one set of four climbs left until our last big climb up to Katahdin, the northern terminus of the Appalachian Trail. The last one, called White Cap Mountain, should be the biggest one. Our packs were pretty light this time. Bob and Rosemary (Sherpa‘s parents) planned another food drop for us. So we only carried two days worth of food. Initially we wanted to hike all the climbs and camp at a shelter just at the descent. This would lead us to about 13 miles (21 km). Somehow we were way faster than expected and ended up at the planned shelter at 3pm – way to early to stop the day. We did another 4 miles to the next shelter and found an awesome camp spot just besides the trail with a view to the nearby pond. As we did a longer day than we initially planned we reached the planned road crossing for our food drop already at noon the next day. Bob and Rosemary came an hour after we reached the crossing. Their truck was not only loaded with our food, they setup a whole trail magic in the wilderness. About 10 hikers crossed the road while we were sitting there. All of them were pretty exited. Nobody expected trail magic in the 100 mile wilderness! We got so comfy that we decided to head back to the cabin once more and get a shower. But only if we would start our next day early to gain some miles. So should it be!

The next day we started before 7am. Sadly, we couldn’t start earlier. The only way to get into the 100 mile wilderness via car is to use the logging roads. These roads are private and the gate opens at 6am. We heard about hurricane Florence. Our planned summit date was September, 17th. The hurricane should bring a lot of rain on this date. Our plans changed. We decided to summit Katahdin already at September, 16th. That means we had to hike two 25 mile (40 km) days and than do the summit push. As always Sherpa speeded hard. Big Bunny and I haven’t seen him the whole day. He even wasn’t at our planned lunch spot – he already headed out as we reached the spot. Big Bunny and I did 26 miles (42 km) that day and it already got dark. We were pretty exhausted and decided to stay at a shelter. We haven’t slept in a shelter for months. Sherpa was ahead of us and camped at a pond. Big Bunny and I started our day at 5am the next morning (we wanted to start at 4am, but somehow the alarm didn’t work). As we reached the pond, Sherpa was just ready to hike out. We did another long day – all the way to the border of the Baxter State Park. Baxter Peak aka Katahdin is located in the park. There are tons of strict rules in the park. For example you’re only allowed to camp at certain spots. All of them, besides a 12 person shelter with some tent spots, cost money. Nevertheless they were all booked. We had to change our plans once more. So we headed back to the cabin. The new plan was to start our summit push at 11pm and do all the climb in the dark. This should lead to a sunrise on the summit und hopefully not too many people at the summit. As the summit is the northern terminus of the Appalachian Trail, we could choose any trail down the mountain. Of course I wanted to do the most difficult one 😂 The trail down the mountain I wanted hike is called Knife Edge. It is a ridge line walk with some technical climbing in between. We packed our packs only with the needed stuff, so they were pretty light. We went to bed very early. Nobody had a long sleep – I would say about one or max two hours. We were just way to excited for our last day on the trail.

Bob and Rosemary drove us to the border of Baxter State Park and so we started our last day on the trail. The first 5 miles (8 km) were pretty flat. We hat to hike through two campgrounds and I think we woke up tons of people 😂 A summit push wouldn’t be possible without a climb. Absolutely nobody told us about what should be ahead of us! The climb got steeper and steeper. Just as we reached the tree line we took a break. Even it was nighttime it was pretty warm. We all sweated and had to dry out a bit before we were out in the elements without any cover. We continued our climb. Oh my gosh. The climb got quite technical in between. How the hell are the older people on the trail doing that? Not thinking about the eleven blind guys who finished the trail so far. Or pappy, the 87 year old man, who is on the trail right now. He could be the oldest man ever completing the Appalachian Trail.

All in all we were good in time. The summit and the long awaited summit sign couldn’t be too far away. Out of the sudden we saw the sign. Nobody was ready for this. Big Bunny ran to the sign to touch it. I just screamed as loud as I could. What a feeling to reach your goal after almost 2200 miles (3520 km)! We reached the summit at about 5:30am. The summit was covered in clouds and it didn’t look like a good spot for a sunrise. But we were lucky. Just as is got brighter the clouds cleared up. OMG… what a view. It was simply amazing. We couldn’t see anything and out of the sudden we had this view. Wow! After soaking up this view we did our obligatory summit pictures.

As we were pretty exhausted from the long climb and almost no sleep at all we took a nap. It was pretty cold up on the summit. Luckily, we had our sleeping bags in our packs. I looked for a flat spot. As the summit is covered with rocks and big boulders I just chose a flat rock and immediately felt asleep. More and more thru-hikers showed up on the summit. It was interesting to watch them as they reached the summit sign. Soooo many emotions!

After about 4 hours on the summit it was time to push on. The trail down the mountain should be the very famous Knife Edge. Sherpa wanted to join me. Big Bunny thought about hiking the Knife Edge and then turn around to hike the same trail down as we came up. Someone had to register us as the ranger station (we had no permit so far). As his ankle didn’t feel to good, he decided to turn around pretty soon. Sherpa and I went on. The beginning of the Knife Edge was pretty scenic, although we had no view at all. More and more clouds came in. We had a lot of fun. We came into one very scary stretch with a lot of technical climbing. We literally had to climb an almost vertical rock wall. Without any security a false step could mean death! Our hands were shaking at the Pamola summit sign – which is the end of the Knife Edge. I just had to climb the summit sign itself to show myself that I successfully conquered the Knife Edge. What a feeling. The rest of the descent was pretty easy. The views tough were amazing once more!

We reached the parking lot and had no idea when someone shows up to pick us up. We relaxed there for about four hours and enjoyed our time. Being done after 5 months just felt so unreal! The time to realize what we all just achieved wasn’t there yet. Big Bunny showed up with his parents, which was quite a surprise. We knew they would drive up to Maine, but nobody expected them in Baxter State Park. But, this amazing day shouldn’t end there! As we drove out of the park we saw a car at the side of the street. All the people got out of the car and stared towards a pond besides the street. What we saw in the pond was the perfect ending for an amazing journey. A whole moose family including a cub! Only a few people are lucky to see a whole family.

We drove back to the cabin where Sherpa‘s parents were already waiting. I had a great sleep this night. The next morning we packed all our stuff and headed towards New York. I drove with Big Bunny’s parents. Sherpa and his parents were also heading to New York. We spent the night at Big Bunny’s house. Sherpa‘s parents live in Alabama. They offered to drive me all the way to my friends house in Columbia, SC. This meant at least 6 hours more of driving for them. I was so thankful! We had to say goodbye to Big Bunny. Hiking such a long time together means you really get to know the persons you’re hiking with. So saying goodbye was very hard. The tears just started and we all cried! I love these two guys! I definitely made two lifelong friends!!!

Back in Columbia my friend Cindy picked me up. As she had to work and her husband wasn’t there, I had their lovely house on my own during the day. She even gave me the keys for one of their cars. Cindy is amazing!

Nevertheless I have mixed feeling right now. I look forward to see my family and friends again. On the other side I have to leave some amazing people and new friends. I’ll also miss the lifestyle out on the trail. This won’t be my last adventure in the states!