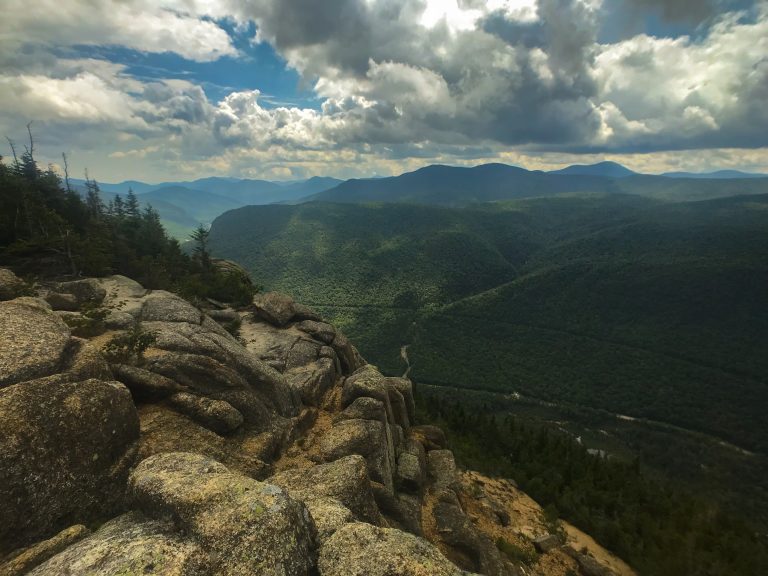 As we celebrated Sherpa‘s birthday the other day, we already knew that we would stay another day in town. We went to the Yellow Deli. I would say it’s kind of a religious cult. They have an amazing restaurant in town. Just besides the restaurant they do have a donation based hiker hostel. The people from the Yellow Deli were all amazing! The rooms were clean. The bathroom was clean. The food at their restaurant was just incredible. They also own a farm and brew their own Mate tea.

We headed back out to the trail the next morning. The mountains got higher, the trail got harder, but the views also got way better. Soon, we crossed the border to New Hampshire. Only two states left. But definitely one of the toughest ones. Just a mile after the border the trail goes right through a town called Hanover. We mailed some stuff ahead. Mainly food and also some winter gear. Hanover is the last big city before reaching the White Mountains. You should always expect cold weather high up in the mountains above tree line. That’s why I switched back to my warmer sleeping bag, fleece jacket, gloves and a merino leggings. We decided to stay in town for one night. The next morning we did a resupply and mailed some more stuff ahead. Bigger towns with grocery stores near to the trail are getting rare.

We headed out of town pretty late. It was incredible hot and humid that day. We only did 3 miles until we heard thunder rolling in. So we set up all our tents and it began raining. We stayed dry. Perfect timing! We should reach the White Mountains pretty soon. Our pace slowed down a lot. Instead of about 20 miles a day, we were only able to do about 12 miles a day. The first big climb in the Whites is Mount Moosilauke. Down in the valley, just before the climb starts, there is a hiker hostel and a post office. We wanted to get our stuff at the post office. Unfortunately, the post office is only open between 12am – 2pm. The hostel owners offered to slack pack us over the mountain and grab our package. Slack packing means we dropped all our heavy gear. Tents, sleeping bags, food, etc. Our packs were pretty light on that first big climb. We had to climb almost 4000 feet. It was very exhausting. But the views up there were so incredible! We enjoyed our time up there. Although, there were a lot of day hikers. The downhill was crazy steep. Almost like a vertical down. One mile took us one hour. It felt like forever.

After we did the downhill, the hostel owners dropped all our stuff at a parking lot. Big Bunny‘s cousin lives about an hour south of our location and offered to pick us up. She cooked Tortellini for all of us. We were able to take a shower and do laundry. I met her husband, her two daughters and her dad. All of them were very kind. They had an awesome property with a camper in the backyard. Obviously, we had to sleep in that camper! The next day Big Bunny’s cousin drove us through town. At first, we went to an outfitter to buy some fuel and other random stuff. Next, we did our food resupply. Finally, we went to a shoe store to buy some new hiking socks. And the day somehow got better because they carried the new Altra Lone Peak 4.0 trail runners. This shoe was just released a week ago and were mostly already sold out. Sherpa and I got very lucky. We both found the right size and started the day in new hiking shoes. These shoes should feel amazing the next few days. I already ordered an extra pair! We spent a lot of time in town and hiked out very late. We only hiked about 3 miles to a stealth site. Within this three miles we met a guy. I cannot remember his name. He told us he walked 15.000 miles the last years. At first, we thought he misspoke himself. But, he does the Appalachian Trail the forth time this year! Crazy!!!

The next big mountain on the list was Mount Lafayette. Another steep 4000 foot climb. The last few miles before the summit is on a ridge above tree line. It’s supposed to be a very scenic stretch on the trail. Unfortunately, we got pretty shitty weather. It rained a lot. When there was no rain, we were in the clouds all day. But, walking on a ridge in high wind is also kind of nice. In late afternoon it finally cleared up and we were able to set up our camp besides a pond up in the mountains.

As the White Mountains are a National Forest and not a National Park you’re allowed to basically camp everywhere. As there are a lot of stretches above tree line and a lot of ridge line walks we had to plan our spots accordingly! We also hit the Presidential Range including Mount Washington. Mount Washington is known for one of the worst weather in the whole states. You don’t wanna camp up there in a storm. Another option in the Whites, as there are a lot of day hikers, are the Huts. The Huts are kind of hostels in the mountains. They’re pretty expensive and booked all over the season. But, as a thru hiker, you can get the food leftovers! There is also a work for stay option, but we wanted so camp through the whole Whites!

The next big climb should be Mount Washington. It is a 5.000 foot climb over 13 miles with no option to camp at the top. We hiked up to a view point called Webster Cliffs. The views up there were amazing and we had the second day of good weather in the Whites. We set up our tents just besides the cliffs at 2pm and relaxed the whole day. We had rain in the night. The next morning we started our hike at 5am and planned to hike 20 miles including Mount Washington and the whole downhill down to the valley afterwards. We had a lot of fog and rain in the morning. As it was dark outside we had to use our headlamps. The day also started with some serious climbing on wet, slippery rocks. In total, a very bad and miserable start for such a tough day. At least the rain stopped and we got free breakfast including scrambled eggs and pancakes in one of the huts. The final climb to the summit of Mount Washington was crazy. We got wind speed up to 64 mph. Finally, we reached the summit. There were tons of tourists on top of the mountain. You can either drive up there or take a train. And they all wanted to take a picture of the summit sign. There was even a line to take a picture! Wtf, we walked all the way up to the summit and had to wait for that tourists driving up the mountain to take a picture!? The wind up there was that crazy that we could lean into it just as we started the descent. As we did the first descent stretch the weather finally turned great. We got sunshine and fantastic views. We’ve been waiting for that moment! I definitely enjoyed my time up there and we did a lot of breaks. It got late and there was no way we could do all the descent down to the valley campsite. We camped near to last hut before the last descent.

That leads to 8 miles the following day down the the visitor center. We planned to do a zero day in town. We were all pretty exhausted from all the climbs the last days. As there was a bike race the next day up the road to Mount Washington all the motels in town were already booked. We had to go to the next town 20 miles away to get a room. The weather is supposed to be pretty rainy the next two days. Perfect timing for doing a zero day!