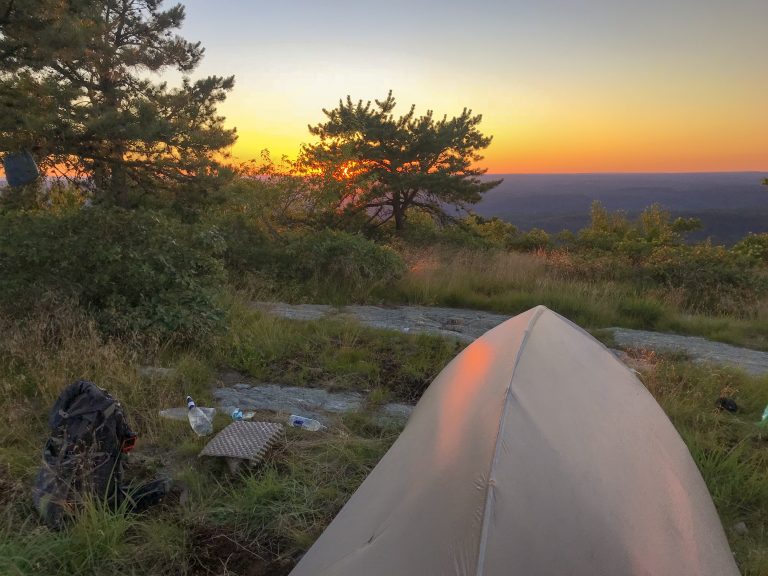 As I left Delaware Water Gap the extensive heat continued. Right after the town there was a pretty far bridge crossing. This crossing was the border from Pennsylvania into New Jersey.

The trail in New Jersey is almost as rocky as in Pennsylvania plus there were a lot more climbs. So, it got way harder. But, New Jersey was awesome! The first day in New Jersey I got Trail Magic three times. I literally didn’t touch my food bag at all that day. The first Trail Magic had everything a hiker could imagine. Hot Dogs, Burgers, Lasagne, fresh fruits, cake, all kind of beverages and a lot of beer. I chilled there for at least three hours. After another two hours of hiking there was the second Trail Magic. Just as I got hungry again. Perfect timing ? These guys even had cereals and fresh cold milk. Just before I reached my camp spot for the night there was this cooler in the woods. The cooler was full of gatorades and bananas. Perfect way to end a nice hiking day.

The water situation got very bad these days. There wasn’t any rain for two weeks. As the trail is mostly up on the ridge line all the water sources were completely dry. Thank god there were a lot of former thru hiker living nearby. They put gallons of water in every road crossing on the AT. It wouldn’t be doable without the help of these guys. I’m sad I never met one of them to thank them.

The next day I ran into a guy called Sherpa. We met each other at least five times that day. There was a Ranger Station a little bit off the AT. They had a spigot outside. This was the only way do get some water this evening. Just as I was ready to hike out, Sherpa came in. We decided to hike out together and look for a camp spot. The next couple of days I hiked with him. We just went over the border into New York.

New York is an awesome state on the trail. Very beautiful landscape and a lot of fun climbs in between. The next day Sherpa and myself decided to go into town to watch some soccer. It was the semi-final between Russia and Croatia. We met some guys who started the trail with Sherpa. How cool is that? We had a lot of fun in the bar and even played some pool after the game. I ripped them all off ? We got so drunk in the bar. We even didn’t realize that it got dark outside. As we had no place in town to sleep at, we used our headlamps and hiked out. Going up a steep mountain in the dark while being drunk isn’t a lot of fun at all ?

The guys wanted to spend a zero day at a hikers house. The hikers name is Big Bunny. He lives in Brewster, New York. They asked me if I wanna join to watch the final of the World Cup. Of course I would join them! They picked us up at a parking lot just in the evening before the final. There were about 15 hikers in Big Bunny’s house. We set up our tents in his backyard. Just right before it started raining. Perfect timing. And, what an awesome place to stay at. He has an amazing house with a perfect view down the lake.

So, the next day, we all watched the final of the World Cup. I voted for Croatia. What a bummer that they lost. It was the best zero day I had so far. It was a lot of fun!!! I was also very excited about a friend from Germany to visit me. Big Bunny offered to pick him up at the train station the next day. He’s such a friendly guy.